Back to work on the fifth day of Chinese New Year

Yesterday, my first day at work after the Chinese New Year holiday. It was tough getting back into the work rhythm just as getting back to blogging is.

The office was mostly a flood of red from the mini-decorations at some of the workstations to ladies wearing red dresses and guys in red flannel shirts. Red baju kurung (traditional Malay lady two-piece outfit) also contributed to the festive energy in the office. The Year of the Dragon is going to be one great year! 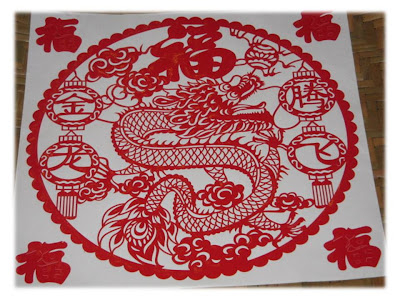 The above is a paper-cutting design of a dragon since the new year is the Year of the Dragon. This image was shot at a shopping complex where it was displaying Chinese New Year artwork such as these papercuttings and couplets for the new year. From the 7th to 13th century, paper cutting became popular especially during Chinese holiday festivals. Today, papercuttings are mainly used for decoration although they used to be used as patterns, especially for embroidery and lacquer work. (Wikipedia)