All that glitters is not gold in Kampung Melayu, Johore

Indeed, all that glitters is not always gold as what the gold-panners found out at Kampong Melayu, a village near Pontian in Johore, the southernmost state in Peninsula Malaysia.

According to Wikipedia, Panning for gold often results in finding pyrite, nicknamed fool's gold, which reflects substantially more light than authentic gold does. Gold in its raw form appears dull and does not glitter. 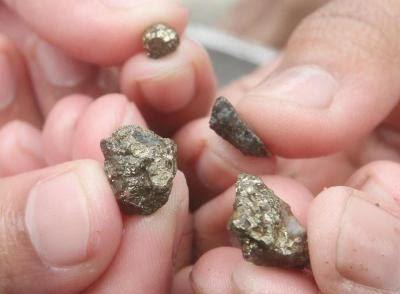 Worthless glitter: The shiny stones that created a frenzy in Jalan Mewah in Kampung Melayu. They are believed to have come from a quarry in the Gunung Pulai area near Pontian.

For the past five days, villagers in Kampung Melayu have been digging for these supposed gold deposits on stones along Jalan Mewah. 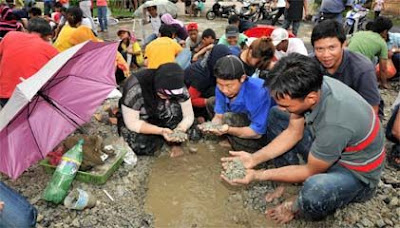 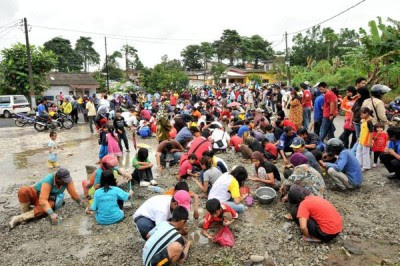 According to Associate Professor Dr Md Radzuan Junin, head of the Geology Depart­ment of Universiti Teknologi Malaysia’s Faculty of Petroleum Engineering and Renewable Energy, the glittering stones had always been mistaken for gold.

The shiny stones are known as ‘fool’s gold’. They glow in the dark and shine under the sunlight due to its iron sulphide or pyrite content.

Since the stones came from a quarry in the Gunung Pulai area near Pontian, they are actually granite stones embedded with iron sulphide. The stones were dumped in the area together with earth by City Council for a drainage and road-widening project two weeks ago.

“Gold deposits in Johor can only be found at Gunung Arong in Mersing and Desaru. Commercial gold mining activities took place in Mersing several years ago,” added Dr Md Radzuan.

Proprietors of several goldsmith shops in the city centre revealed that the stones do not have any value. One said, “It is not gold at all and I have no interest to buy because it has no value. They can keep the stones as decorative items.”

The road that has recently been widened and paved is now riddled with potholes due to the digging. The area in Kampung Melayu has since been cordoned off by Johor Baru City Council to prevent unnecessary disruption from trespassers although one housewife is determined to "try my luck again and continue until I strike gold.”

The high price of gold has been cited as a factor that led to a gold rush at this Johor village.

Here's a Google map for an idea of its location. The area in question is the 'B' area which you can enlarge map for a better view.