I Hear You Knocking.. - Alligator at the door

Have you sometimes seen a picture or an image or hear a song, and instantly link it to something you have seen before?

During the recent Bangkok floods, a picture of a crocodile literally standing at a door instantly got me linking it to this song by Dave Edmunds - I Hear You Knocking. Funny stuff! Give the song a listen. It's a good ole rocking number.

This is Mr Croc in question. I hear you knocking, but you can't come in.. 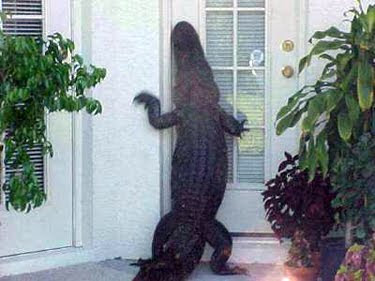 On looking for the source of this image, found that this wasn't in Bangkok but rather in Jamestown, western New York. This 3-foot alligator was found wandering in someone else’s yard. The resident immediately reported the incident around 7:45 a.m to the police. The authorities and the animal control officers came rushing to the place and were able to catch the alligator. When ask, residents didn’t know where it come from or how long had been wandering in the area. Here is the source, Alligator knocking on your door.

Apparently, alligators are known to do that - knock on doors. Here is another instance of one such spectacle..'Darling, there's an alligator at the door'. 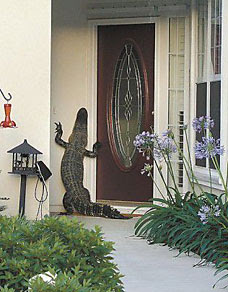