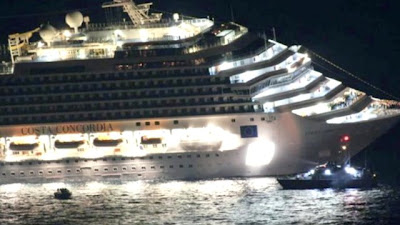 According to BBC, the Costa Concordia hit a sandbar on Friday evening near the island of Giglio and listed about 20 degrees, after which people tried to reach land in lifeboats or by swimming.

Rescue teams have been going from cabin to cabin, searching for survivors.

Italians, Germans, French and British were among the 3,200 passengers. There were also 1,000 crew on board.

Helicopters evacuated the last 50 people on the deck who were in a "worsening" situation.

Passengers were eating dinner on Friday evening, when they heard a loud bang, and were told that the ship had suffered electrical problems.

Rescued passengers are being accommodated in hotels, schools and a church on Giglio, a resort island 25km (18 miles) off Italy's western coast.

Location where CCosta Concordia, went aground..

You can read more about it on bbc.co.uk..Italy cruise ship Costa Concordia aground near Giglio