Slow-moving traffic - The Exodus out of Kuala Lumpur has begun 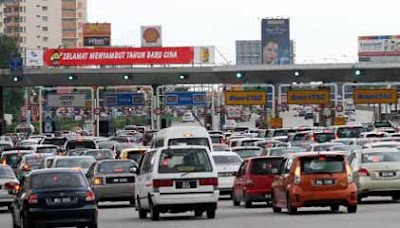 At a toll plaza in KL (Source: The Star)

With the long weekend coming up, Chinese New Year holiday being on Monday and Tuesday, the exodus out of Kuala Lumpur has started. Like I was, you could also have been caught in a traffic crawl last night in roads leading out of the city. I was caught along the Middle Ring Road 2 (MRR2) going towards Batu Caves.

A check on realtime CCTV traffic images on parts of KL shows the city is distinctly deserted this morning. Images were captured around 7:10am this morning. Take a look. You can click on image to enlarge it. 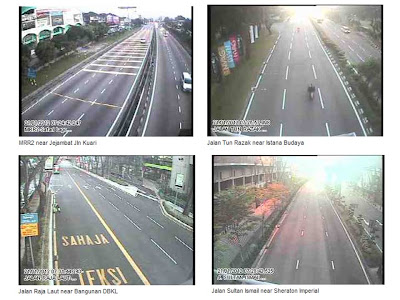 A little about each area..

Top left: Middle Ring Road 2, the highway I was caught in traffic last night. This is a long stretch of highway that links to the North-South Expressway. Places of interest this MRR2 passes through are the National Zoo and Batu Caves and which you can have a distant view of the Petronas Twin Towers and KL Tower.

Bottom left: Jalan Raja Laut, a part in KL that is normally busy.

During major festivals such as Chinese New Year and Hari Raya Puasa, the city is probably the best place to be if you want some peace and quiet.

View realtime traffic..
Posted by HappySurfer at 7:13 AM