EU Referendum - Final results are in

Brexit it is. UK votes to leave EU after 43 years in historic referendum. 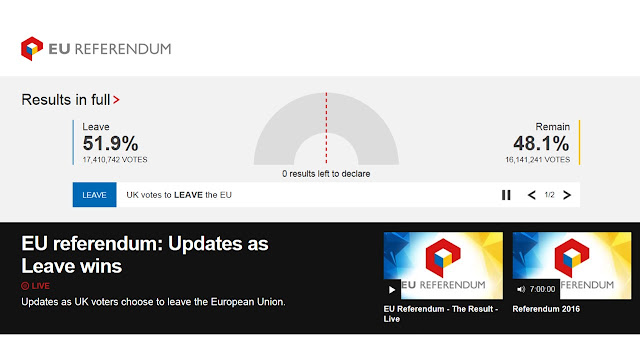 Leave won by 52% to 48% with England and Wales voting strongly for Brexit, while London, Scotland and Northern Ireland backed staying in the EU.

Prime Minister David Cameron is to step down by October after the UK voted to leave the European Union.

Speaking outside 10 Downing Street, he said he would attempt to "steady the ship" over the coming weeks and months but that "fresh leadership" was needed.

The PM had urged the country to vote Remain but was defeated by 52% to 48% despite London, Scotland and Northern Ireland backing staying in.

The pound fell to its lowest level against the dollar since 1985 as the markets reacted to the results.

Posted by HappySurfer at 2:16 PM