Corpse flower blooms in a decade

For horticulturists and nature-lovers, here's an image of a rare Indonesian flower known as the “corpse flower” named thus for it emission of a pungent odour of rotting meat, luring pollinators that feed on dead animals. 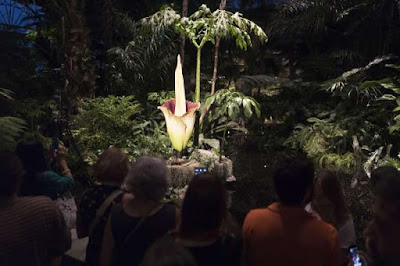 Visitors flock to the New York Botanical Garden all summer long for whiff of its fragrant blooms.

The six-foot plant - it grows much taller in its natural habitat of Indonesia - has not bloomed for a decade, and has been carefully tended by horticulturalists here in the Bronx every day.

The “Amorphophallus titanum” was last on display in bloom at the botanical garden in 1937, the first time it was showcased in the western hemisphere. It takes years to conserve enough energy to go into bloom, during which the yellow “spadix” - the spike of the plant - self-heats to human body temperature to emit the rotten smell - and it is all over within about 36 hours.

After the plant withers back over the weekend, we will have to wait years before the unpredictable bloom takes place again.