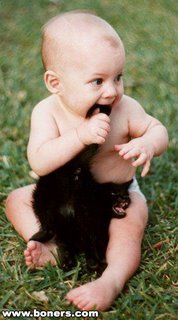 Malaysia is a multi-racial country. Even the Chinese community is made up of people from different dialect groups, i.e., Cantonese, Hokkien (Fujian), Hakka, Teochew, Hainanese, and others, and even these can further be subdivided into various sub-dialects. However, the amazing thing is that all dialects use the same common written form, the Chinese characters.

In Malaysia, each area or city somehow has a dominant dialect, e.g., in Kuala Lumpur, the lingua franca is Cantonese though other dialects are also spoken but to a lesser extent. However, in Penang, Hokkien is the main dialect used.

And talk about Hokkien, here's a poem for you, Hokkien lang. ** Special note to the uninitiated: "kia" is Hokkien for "a child of" or an equivalent.

Person who read this message is Gong Kia
If you laugh, you are Siow Kia


Peace!
Posted by HappySurfer at 2:38 AM