Did you get this text message as well? The one that says..

“Tonight 12:30am - 3:30am be sure to turn off the phone: Singapore TV has announced the news. Please read about it and take care of yourself. Tell your dear relatives and friends: This evening from 12:30am - 3:30 am, dangerous, high radiation, cosmic rays will pass close to the Earth. So please turn off your cell phone. Do not let your cell phone be close to your body, it may cause damage. Please check the Google NASA and BBC News. Forward this message to all you care for.”


You didn't believe it, did you? Why? Because that's a hoax message. In fact, this 'untruth' has made its rounds numerous times over the years.

A quick google yield amongst others back in 2015, even the authorities in Brunei had a message out that goes as follows:

The Authority confirms that no such information has been released by either NASA or BBC concerning cosmic rays passing the earth causing harmful radiation through cell phones.

In this regard, the public is advised not to panic or pay heed to this. The Authority also advises against spreading such false information to others'.

IB Times of Australia said this hoax surfaced as early as 2008 and then in 2012 again and that the Earth’s atmosphere likewise has protection against most cosmic rays. The rays would only affect phones would be if it impacts satellite communications, but not on the device itself or the gadget’s batteries'.


According to NASA: The sun's magnetic field is our first line of defense against these highly-charged, energetic particles. The entire solar system from Mercury to Pluto and beyond is surrounded by a bubble of solar magnetism called "the heliosphere." It springs from the sun's inner magnetic dynamo and is inflated to gargantuan proportions by the solar wind. When a cosmic ray tries to enter the solar system, it must fight through the heliosphere's outer layers; and if it makes it inside, there is a thicket of magnetic fields waiting to scatter and deflect the intruder. 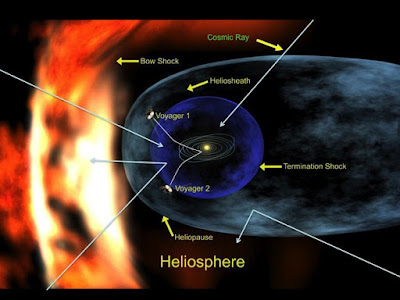 Earth is in no great peril from the extra cosmic rays. The planet's atmosphere and magnetic field combine to form a formidable shield against space radiation, protecting humans on the surface. Indeed, we've weathered storms much worse than this. Hundreds of years ago, cosmic ray fluxes were at least 200% higher than they are now. Researchers know this because when cosmic rays hit the atmosphere, they produce an isotope of beryllium, 10Be, which is preserved in polar ice. By examining ice cores, it is possible to estimate cosmic ray fluxes more than a thousand years into the past. Even with the recent surge, cosmic rays today are much weaker than they have been at times in the past millennium'.

There you go. Now you know. Spread the word!

Posted by HappySurfer at 9:30 AM