We go through life, some mundane, others exciting, unusual, difficult, challenging but in most cases, change is not an option. Human nature is difficult to fathom. That's why the world is such a melting pot of differences. Some of us put ourselves in a spot, some in the work environment others in our leisure activities the latter, mostly by choice, I should think. Have you ever, ever done anything death-defying either at work or in your pursuit of leisure? The following article may be a case in point. 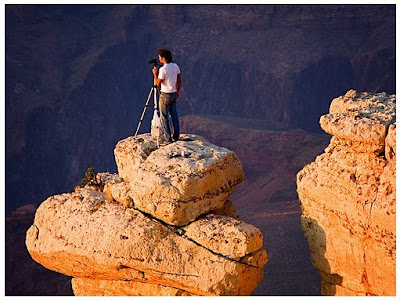 I was simply stunned seeing this guy standing on this solitary rock IN the Grand Canyon.
The canyon's depth is 900 meters here. The rock on the right is next to the canyon and safe.

Watching this guy in his thong sandals, with a camera and a tripod I asked myself 3 questions:

1. How did he climb that rock?
2. Why not take the sunset picture on that rock to the right, which is perfectly safe?
3. How will he get back? 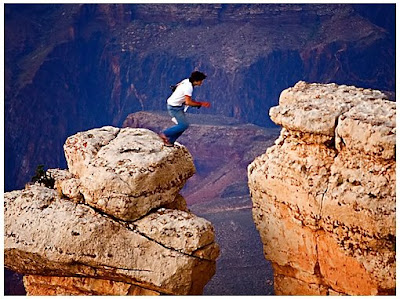 This is the point of no return. 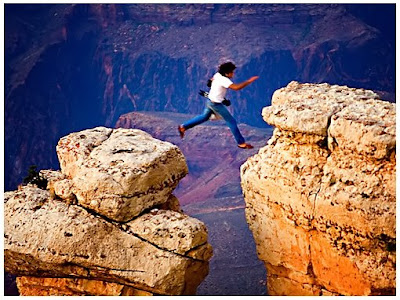 After the sun set behind the canyon's horizon he packed his things (having only one hand available) and prepared himself for the jump. This took about 2 minutes.
At that point he had the full attention of the crowd.

After that, he jumped on his thong sandals....

Now you can see that the adjacent rock is higher so he tried to land lower, which is quite steep and tried to use his one hand to grab the rock. 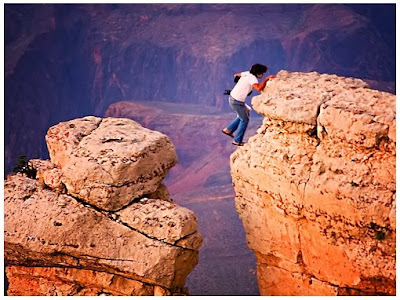 We've come to the end of this little story. Look carefully at the photographer.
He has a camera, a tripod and also a plastic bag, all on his shoulder or in his left hand.
Only his right hand is available to grab the rock and the weight of his stuff is a problem.
He lands low in his flip flops both his right hand and right foot slips away...
At that moment I take this shot.

He pushes his body against the rock.
He waits for a few seconds, throws his stuff on the rock, climbs and walks away.....


Now, did that little episode get your adrenalin pumping? Actually, the title of the article is "Leap of faith.....or stupidity?". What do you think?
Posted by HappySurfer at 1:38 PM