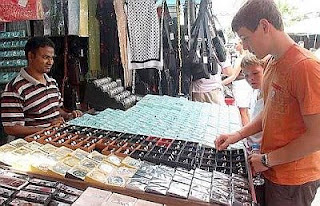 On my last visit to Chinatown, particularly Petaling Street which is the hub of Chinatown, I was taken aback by the people manning the stalls. It felt somewhat strange seeing foreigners, mainly Burmese and Nepalese, manning the stalls which used to be manned by people of Chinese descent, afterall it is Chinatown.

Chinatown is no longer Chinatown in its true sense. I am not racist nor have I ever been but it brought home that times they are a-changing and we have no choice but to move along with the times.

The redeeming factor is that the foodstalls are still being operated by the original owners or their family. Food-wise, Chinatown is still intact - the taste is still very much authentically Chinese. In this part of Kuala Lumpur, you can still find KL's best Hokkien fried noodle, best roast duck, best soya bean drink, and more. A common sight I delight in is of visitors (Caucasians mostly) hanging out having a beer or two soaking in the sights and sounds of Chinatown. It always puts a smile on my face.

I am glad Chinatown is still attractive enough to entice visitors. It is often said that, you have not seen Kuala Lumpur if you have not been to Chinatown. Just the other day, a visiting colleague was given a shopping list which included football jerseys from Chinatown. His friend even equipped him with the stall number and the contact person! 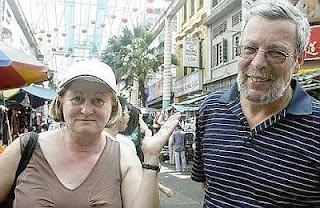 Baunach Ulrich and his wife (above) from Germany said they were fine with foreign workers selling the merchandise, but were not in favour of the cramped placements of stalls. Fortunately, Kuala Lumpur City Hall (DBKL) has shelved a plan to add 94 new stalls at Petaling Street following strong objections from traders who find it increasingly difficult to do business in the area.

Another visitor, Lindy from Australia likes "the atmosphere here - red lanterns, haggling, good food - and I can shop cheaply, it doesn’t really matter if those who man the stalls are foreign workers."

Come, let me take you to Chinatown - through a video. The place is shown in daylight. It never used to be that busy during the day as business only begins at nightfall when the street is closed to auto traffic. These days (since the last few years), business starts early, as early as ten-ish.


Source...The Star
Tourists have no qualms about Petaling Street’s image
DBKL: No new stalls in Chinatown
Posted by HappySurfer at 11:38 AM