David Moyes has been sacked by Manchester United

The Dailymail.co.uk reported that

David Moyes has been sacked by Manchester United with immediate effect. 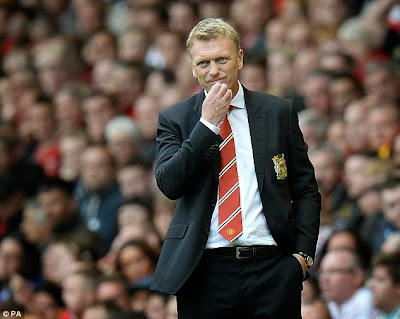 Chief executive Ed Woodward arrived at Carrington at 8am on Tuesday morning to inform the Scot face-to-face of the news.

Ryan Giggs will take temporary charge for the rest of the season as interim manager.

It emerged on Monday that United's owners, the Glazer family, had lost patience with Moyes after a dismal season that has seen the reigning Barclays Premier League champions slump to seventh in the table.

The final straw was Sunday's 2-0 defeat at Everton, their 11th in the Barclays Premier League this season, and a result that left the title holders 13 points off the Champions League places.

For more on Moyes - news, photos, videos, timeline of his tenure at Old Trafford, visit: http://www.dailymail.co.uk 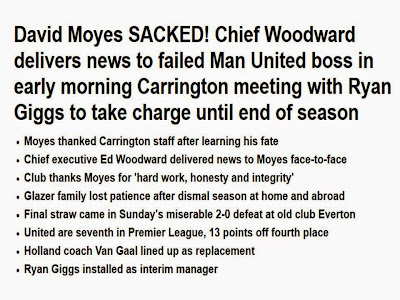 Here's the latest English Premier League (EPL) table with three more games to go. The way things are going Manchester United may not even get into next year's UEFA Europa League. Argh!! 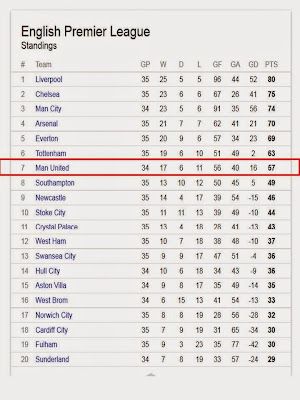 Posted by HappySurfer at 5:26 PM