Malaysia has lost a great statesman, a true patriot, a fighter for the people.
Farewell, Tiger of Jelutong.
Rest in peace. 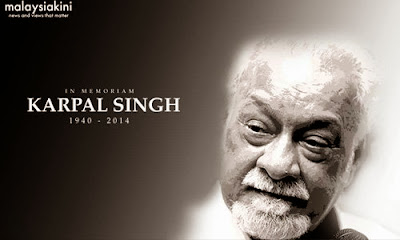 Bukit Gelugor MP Karpal Singh died in a car accident on the North-South Expressway this morning near Gua Tempurung, Kampar in Perak.

Kampar police chief Superintendent Ng Kong Soon confirmed that Karpal died in a road accident at KM306.1 of the North-South Expressway near Gua Tempurung at 12.40 am today.

Karpal, who would have turned 74 in June, was believed to be travelling from Kuala Lumpur to Penang to attend a court hearing scheduled for this morning. Continue reading: The MalaysianInsider


From Malasiakini:
Veteran opposition MP and lawyer Karpal Singh was killed in an accident near Gopeng in Perak this morning.

Karpal's son Ram Karpal and the driver were also injured in the accident which occurred at 1.10am near 301.6km northbound marker along the the North-South Highway.

Malaysiakini learnt that Karpal and his son, who is also a lawyer, were heading north for a court case later today.

Photos taken at the scene of the accident - near Gua Tempurung
in Kampar - show the white Toyota Alphard badly damaged. Continue reading: Malaysiakini