Update: This mishap left 29 people dead and 274 others missing. The captain of the ferry that capsized was arrested.


It is incidents like this that gives me the jitters about taking a trip on a sea vessel and to think that going on a Three Gorges cruise in China is on my so-called bucket list.  Aarghh!

Just glad that there is no fatality when this passenger jetty got into trouble en route to touristy Jeju Island in Korea. Unfortunately, the latest news reported that officials said two people had died. 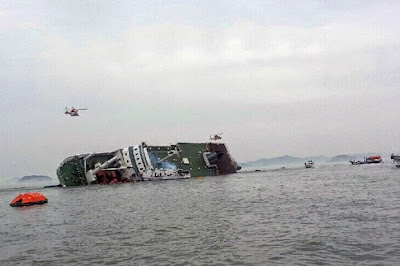 SEOUL (Reuters) - All 338 high school students and teachers on board a South Korean passenger ferry that was reported to be sinking on Wednesday have been rescued, a school official told Reuters.

The ferry, identified as the Sewol, was carrying about 470 passengers, including the students and teachers, en route to Jeju island, about 100 km (60 miles) south of the Korean peninsula.

It sent a distress signal after it began to list badly.