Actually I was going to talk about honeymoon lingerie but the article on topless sunbathers on our own shores cut the queue.

The image below is real. It was taken at Port Dickson, a seaside beach town an hour's drive south of Kuala Lumpur.

According to The Star, the four women were spotted at Pantai Saujana beach at about 3pm recently. 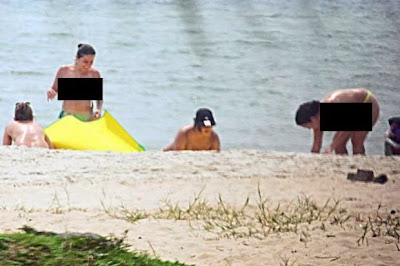 People were shocked. But the women did not look bothered at all.

An eyewitness claimed that the women even removed their bikini bottoms when they were done with their swimming and came back to the beach.

Eventually they became irritated and left as the crowd grew to stare.

By the way, if you are thinking about doing that, you can forget it because here in Malaysia going topless in public is not allowed.


Image courtesy of The Star.

Posted by HappySurfer at 5:14 PM

Email ThisBlogThis!Share to TwitterShare to FacebookShare to Pinterest
Labels: beaches