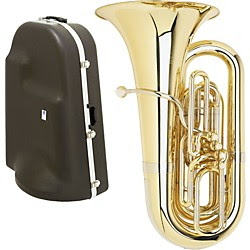 I learned something new the other day about tubas. The image here is of a tuba. I guess you already knew that especially if you are into jazz music. The reason I say that is because tubas are consistently used in jazz music.

There are different tubas available in the market for various types of performances for example, concert tubas are designed with the tubing wrapped so that the player can hold the tuba in his lap.

Helicon tubas wrap around the body and are used for marching along with sousaphones, which are incidentally named after John Philip Sousa.

On recording tubas, the bell points forward instead of upwards. These models were popularized in the early days of recorded music as they could more easily direct their sound to the recording instrument. The length of the tuba determines the fundamental pitch.

Now you know too..