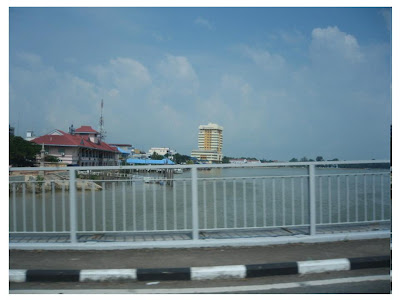 Over the weekend, I joined a friend on a trip back to her hometown, Muar. Before the trip, I thought I'd 'wiki' the place and was pleasantly surprised that I was able to find Muar in Wikipedia.

Muar is in the northern part of the State of Johore on the western side and is some two and and a half hours away from Kuala Lumpur and is roughly in the centre between KL and Singapore. Being a coastal town and not along the main highway route, the only way of getting there is by road. There is no rail nor air service. This little town at one time had the most number of bicycles in the whole of Malaysia. Bicycle-owners had to pay a RM2 licence fee for their vehicle.

The plan was to leave KL at 7am so that there would be less traffic being a Saturday but that did not happen. 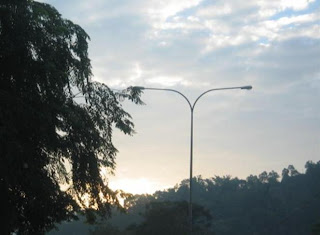 Muar on the west coast is actually facing the Indonesian island of Sumatra where the hotspots are, so the sky was pretty hazy. A river cuts Muar off from the other side. Getting across used to be by way of a ferry service but a bridge built some forty years ago has made it convenient.

The river has been cleaned up as compared to those days, I was told. 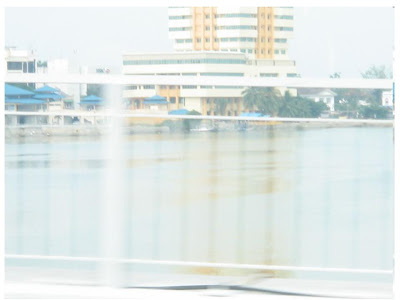 From the middle of the bridge, I noticed a few of these structures out on the river. I believe this is the way they farm cockles. 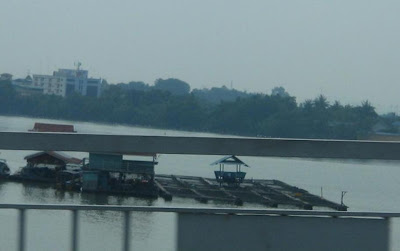 Muar is a fishing town and fresh fish is readily available which accounts for Muarians (as they are called) enjoying the best otak-otak, a spicy fish paste snack wrapped in coconut leaves grilled over a low charcoal fire. Despite Muar being the origin of this snack, otak-otak is still cheaper in Muar than anywhere else and taste much better too. You can get a stick for only RM0.25.

Another famous food found in Muar is the fresh oyster omelette which in local Hokkien dialect is called "ooh-chien" or "ooh-luak" in Teochew - "ooh" meaning "oyster" while "chien" and "luak" meaning "fried", basically fried oyster but in eggs. I was told the best ooh-chien is from one stall downtown in the food district. There is usually a long queue from the time they open their stall in the evening until they close around 10:00pm. Though the food is delicious, it guarantees increased cholesterol, being an oily dish.

Moored by the banks of the river are some fishing boats. 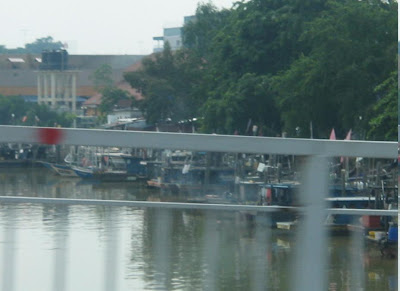 Old and new buildings stand side by side. Note the long poles protruding from the roof. These are 60-foot tv antennas for receiving Singapore programmes. Muar is in a sweet spot where with these tall antennas, residents have the best of both worlds, Malaysia and Singapore tv programmes. 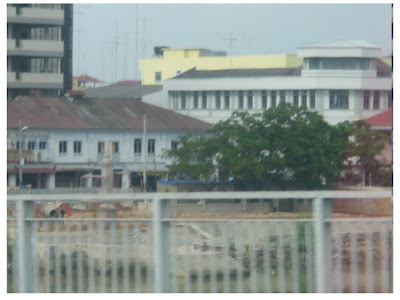 Like all towns in Malaysia, there are still these wooden single-storey shophouses. Notice the zinc roofs. These have been here for at least 50 years. Motorbikes are also a common mode of transport here and they are conveniently parked in front of the shops during the day. The streets were busy with cars and parking lots were scarce downtown. 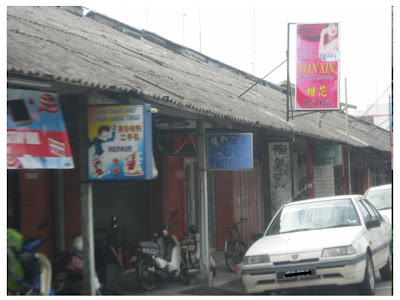 These are the newer shops. The town is still growing. New housing estates and commercial areas are still being developed in the outskirts of the town. 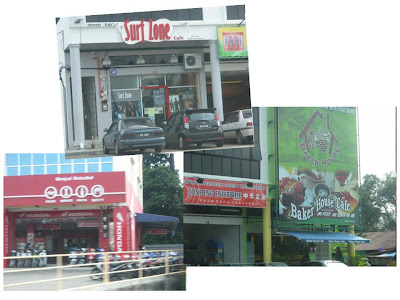 Posted by HappySurfer at 3:23 PM