The scenario below brings to mind Malaysia a few years ago when we were shrouded in thick smog. It was a cause for concern as the Commonwealth Games were approaching and we were the host. However, with open burning not curtailed, this same scenario can resurface anytime. 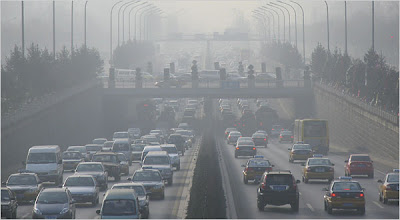 While Beijing is gearing up to The Olympics in August, the city is faced with persistent air pollution despite promises to stage a green Olympics. Beijing is planning to reduce its motor traffic by half during the Games to improve air quality and ease traffic flow, according to a newspaper report on Wednesday.
More..NY Times
Posted by HappySurfer at 2:06 PM