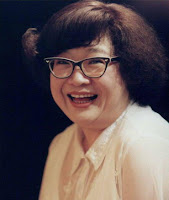 Hong Kong television veteran Lydia Shum Din-Ha or Shen Dianxia, in Mandarin, succumbed to liver cancer yesterday, Feb 19, at 8:38am Hong Kong time, at the Queen Mary Hospital. She was 60.

Born in Shanghai, the actress was affectionately known as Fei-fei for her plump appearance and jolly disposition. "Living with Lydia", her work in a Singapore sitcom, won her an award as the "Best Comedy Performance by an Actress" at the 2003 Asian Television Awards.

Shum starred in more than a hundred movies, including some of Hong Kong’s most popular classic films, such as Drunken Tai Chi, Millionaire’s Express, and It’s Mad Mad World (1987), and even directed and starred in You are Wonderful. She also hosted numerous variety shows produced by TVB, most notably the popular Enjoy Yourself Tonight.

Farewell, Fei Fei, you will be missed.
R.I.P.

Email ThisBlogThis!Share to TwitterShare to FacebookShare to Pinterest
Labels: Entertainment