Google commemorates Dian Fossey today with a doodle on her 82nd birthday today. 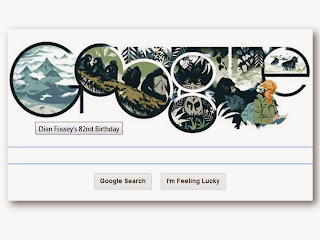 Dian Fossey, if you have watched or read 'Gorillas in the Mist', you would know who she is. Dian Fossey was an American zoologist who undertook an extensive study of gorilla groups over a period of 18 years. She studied them daily in the mountain forests of Rwanda.

Sigourney Weaver played Dian Fossey in this 1988 American drama film. It tells the true-life story of her work in Rwanda with Mountain Gorillas and was nominated for five Academy Awards.

Fossey was discovered murdered in the bedroom of her cabin in Virunga Mountains, Rwanda, in late December 1985. The case remains open. She was discovered 2 metres (7 ft) away from a hole that her assailant(s) had apparently cut in the wall of the cabin.

She was presumably in the act of loading her weapon when she was murdered, but had picked the wrong type of ammunition during the struggle; the cabin was littered with broken glass and overturned furniture. Robbery was not believed to be the motive for the crime, as Fossey's valuables were still in the cabin: thousands of dollars in cash, travelers' checks, and photo equipment remained untouched.

Fossey is buried at Karisoke, in a site that she herself had constructed for her deceased gorilla friends. She was buried in the gorilla graveyard next to Digit, and near many gorillas killed by poachers. Memorial services were also held in New York, Washington, and California. She was 53. 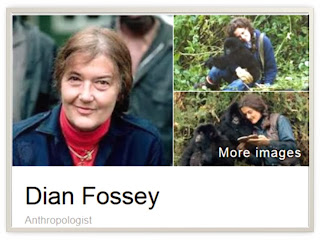