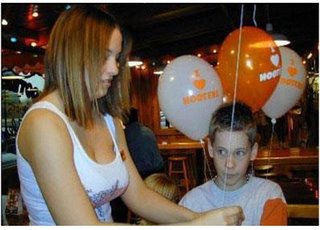 Two jokes for the road. Have a wonderful weekend, everyone.

This joke was voted Best Short Joke of 2005

For his birthday, little Patrick asked for a 10-speed bicycle. His father said, "Son, we'd give you one, but the mortgage on this house is $280,000 & your mother just lost her job. There's no way we can afford it."

The next day the father saw little Patrick heading out the front door with a suitcase. So he asked, "Son, where are you going?". Little Patrick told him, "I was walking past your room last night and heard you telling Mom you were pulling out. Then I heard her tell you to wait because she was coming too.

One day, siew pau (baked bun) and maggi mee (wriggly instant noodles) had a big fight. Maggi mee beat siew pau up until it had bruises on its pau body.

So together all paus went to find maggi mee for revenge.

On the way... they met Spaghetti... so all paus dashed towards Spaghetti and beat the hell out of Spaghetti so much so that Spaghetti can't say a word and Spaghetti
then screamed...

Then the siew pau said..

"HEH! MAGGI MEE! Don't think I can't recognize you after you do REBONDING!"
Posted by HappySurfer at 5:59 PM