One Drink Per Person

Taking "Kiasu" to a new level?!

(For our foreign friends, "kiasu" is a word in the Chinese Hokkien (Fujian) dialect which means the fear of losing out as in wanting to be or having the best or the most. Of late, it has a rather negative connotation to it.
Actions like these among others are construed as "kiasu" - getting into queue way, way too early, heaping up on the buffet plate (and not finishing the food), scrambling and shoving for a seat (unruly behaviour), must have everything the best and the most expensive though at times the former outweighs the latter."


Here's a situation that qualifies as "kiasu"?

This is what happened when a company put up the following memo:

OFFICE MEMO
May all members of staff please note that there will only be one drink per person at this year's Christmas Party.

And please bring your own cup!
It's Party time!!! 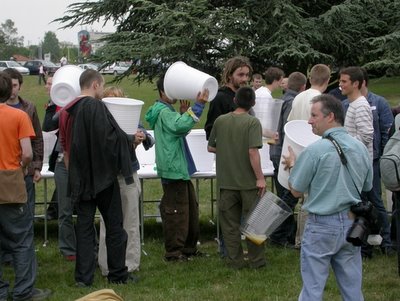 Posted by HappySurfer at 8:50 AM