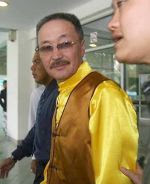 Altantuya's family filed a RM100mil suit against the three accused and the Malaysian Government. The trial was supposed to begin yesterday but it has been postposed to June 18. And in a sudden turn of events which was unexpected and puzzling, the prosecutors in the Altantuya Shaariibuu murder trial were replaced at the last minute on Monday without any explanation.More...The Star

Related story from NST:
Altantuya Murder Trial: The DPPs who were replaced
Posted by HappySurfer at 10:13 AM