If you have been caught in a massive traffic jam downtown Kuala Lumpur, know that you have been a victim of the roadblocks occurring at 12 entry points into the city. Now you know.

All eyes are on the outcome of an emergency motion of no-confidence against Prime Minister Datuk Seri Abdullah Ahmad Badawi and his Cabinet today.

Filed as a non-voting motion under Standing Orders 18 (1) and (2), by Opposition Leader Datuk Seri Dr Wan Azizah Wan Ismail last Thursday, the motion is meant to discuss the performance of the Barisan Nasional Government rather than to elicit a vote.

Dewan Rakyat Speaker Tan Sri Pandikar Amin Mulia will decide on the motion at the end of Question Time at about 11.30am today. More...Speaker to decide on no-confidence motion by noon

Police said they were staving off an illegal gathering that Pakatan Rakyat was planning at Parliament or its grounds this morning, in anticipation of a motion of no-confidence being filed against Prime Minister Datuk Seri Abdullah Ahmad Badawi and his Cabinet.

The police obtained a court order barring Parti Keadilan Rakyat de facto leader Datuk Seri Anwar Ibrahim, his supporters and the public from holding any rally or participating in it within a 5km radius of the Parliament building.

Pakatan Rakyat leaders have denied they were planning any such gathering.

The roadblocks are expected to continue until midnight on Monday or until further notice. 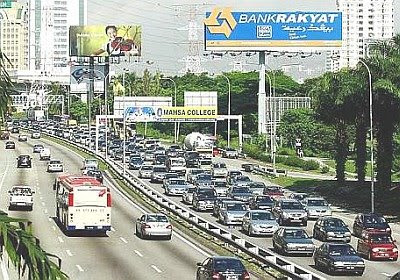 Police roadblocks leading into the city caused massive jams throughout this morning, Monday

Source: The Star...Massive jams
Posted by HappySurfer at 12:18 PM