Listen up if you are a fan of Kentucky Fried Chicken. After you have read this, you will not want to touch KFC again! 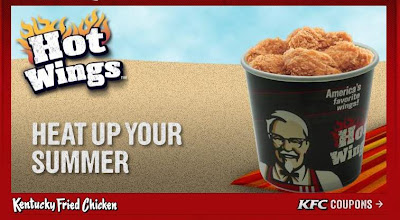 A concerned friend sent me an email.

A Horrible Fact about KFC

KFC has been a part of our American traditions for many years. Many people, day in and day out, eat at KFC religiously. Do they really know what they are eating? During a recent study of KFC done at the University of New Hampshire, they found some very upsetting facts. First of all, has anybody noticed that just recently, the company has changed their name?

Kentucky Fried Chicken has become KFC. Does anybody know why? We thought the real reason was because of the 'FRIED' food issue. 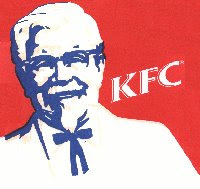 The reason why they call it KFC is because they can not use the word chicken anymore. Why? KFC does not use real chickens. They actually use genetically manipulated organisms. These so called 'chickens' are kept alive by tubes inserted into their bodies to pump blood and nutrients throughout their structure. They have no beaks, no feathers, and no feet. Their bone structure is dramatically shrunk to get more meat out of them. This is great for KFC.

Because they do not have to pay so much for their production costs. There is no more plucking of the feathers or the removal of the beaks and feet. The government has told them to change all of their menus so they do not say chicken anywhere. If you look closely you will notice this. Listen to their commercials, I guarantee you will not see or hear the word chicken. I find this matter to be very disturbing.

What do you think? Are you turned off KFC now?

I was horrified too the first time I read it. Okay, relax! The truth of the matter is, this is a false claim. In fact, this has been circulating for many years now. If I knew then what I know now, I would know where to go to check out this claim. These days, I go straight to Snopes.com whenever something bizarre like this comes up.

Here is what Snopes has to say about this claim on KFC or Kentucky Fried Chicken.

Kentucky Fried Chicken decided to change its name to KFC in 1991 for several reasons, none of which had anything to do with governmental regulations about mutant animals:

1. A move to de-emphasize "chicken" because KFC planned to offer a varied menu that included other types of food.

2. A desire to eliminate the word "fried" which has negative connotations to the increasingly health-conscious consumer market.

3. A recent trend towards the abbreviation of long commercial titles, as demonstrated by other companies employing shortened forms of their names.

So, now you know. The claim that KFC no longer use the word "chicken" to describe its product because it serves meat from genetically-engineered animals that the government will no longer permit to be referred to as "chickens" is totally FALSE.

If KFC is not serving chicken they wouldn't have the word 'chicken' in their site address, Kentuckyfriedchicken.com, would they?