Of Superstitions and Spring

Today is Friday the 13th. Over here, we think nothing of it except that it gets mentioned in a passing conversation. Lots of us here may be superstitious to a certain degree (with different cultures believing in their own superstitions) but avoiding walking beneath a ladder is not one of them, certainly not among the Chinese. I have seen painters and home-renovators zipping back and forth beneath the ladders.

Some superstitions are really bizarre but dare we do otherwise? Do you have your own superstitions? How about sharing them?

In the meantime, let's take a look at this Friday the 13th issue. Borrowed from Wikipedia,

.. an estimated 17 to 21 million people in the United States are affected by a fear of this day. Some people are so paralyzed by fear that they avoid their normal routines in doing business, taking flights or even getting out of bed. "It's been estimated that [US]$800 or $900 million is lost in business on this day".

On the other hand,.. Despite this, representatives for both Delta and Continental Airlines say that their airlines don't suffer from any noticeable drop in travel on those Fridays.

Friday the 13th is so prominent that there is even a word for it:

Several theories have been proposed about the origin of the Friday the 13th superstition. One theory states that it is a modern amalgamation of two older superstitions: that thirteen is an unlucky number and that Friday is an unlucky day.

- In numerology, the number twelve is considered the number of completeness, as reflected in the twelve months of the year, twelve signs of the zodiac, twelve hours of the clock, twelve tribes of Israel, twelve Apostles of Jesus, twelve gods of Olympus, etc., whereas the number thirteen was considered irregular, transgressing this completeness. There is also a superstition, thought by some to derive from the Last Supper or a Norse myth, that having thirteen people seated at a table will result in the death of one of the diners.

- Friday has been considered an unlucky day at least since the 14th century's The Canterbury Tales, and many other professions have regarded Friday as an unlucky day to undertake journeys or begin new projects. Black Friday has been associated with stock market crashes and other disasters since the 1800s. It has also been suggested that Friday was the day that Jesus was crucified.

There you have it, Friday the 13th. Anyway, I love Fridays for many reasons, one of which is that it tells me the weekend is here and that takes away all the gloom of the week.

We just concluded the celebration of the beginning of spring (according to the lunar calendar). The 15-day celebration ended on the past Monday culminating in Chap Goh Meh, a final day of family gatherings, yee sang (tossing of raw fish/abalone and colorful salad, giving of lai see (good luck money in red envelopes given from married to unmarried juniors of relatives and friends) and kind words and decorum. Yes, the squabbles can begin all over again. Oops!

In the old days in China, this last day of celebration would entail maidens tossing oranges into a river from a bridge with the hope of securing a good man for marriage. I wonder if this is still being practised these days. If so, one would find on the orange, a contact number or perhaps an email address? I should think the town council would have a tough time fishing out the trash (oranges) from the rivers.

All said, Spring is here. Even Google is signalling it in their search engine page, I think. Happy Spring, everyone! 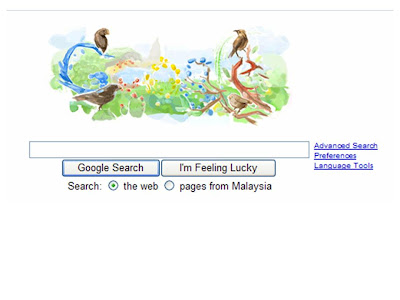 Email ThisBlogThis!Share to TwitterShare to FacebookShare to Pinterest
Labels: Superstitions