Two suns in the sky

The skies hold much fascination and mystery beyond our comprehension. One morning last month, I was surprised to look up at the orangy morning sky to find what looked like a huge round moon very near to the rising sun. If you use your hands to measure the distance, it would be about two feet apart. Was that possible, I was wondering. Did the moon forget to retire for the night or did she stay back to enjoy a morning cuppa with the sun. Of course there is a logical explanation. Round about that time, I read that a star (forgot its name) was coming close to Earth and that it could be seen in our skies. There, that explains it. Then as the sun became brighter, the 'moon' was nowhere to be found. Interesting..

And now, we hear that we are in the midst of being able to see two suns! How bizarre! Here's a video of two suns being spotted in China..

There is an email circulating right now about two suns on June 21. 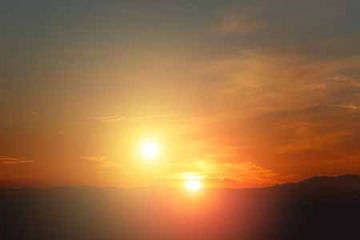 Star Aderoid will be the brightest in the sky, starting 10 June. It will look as large as the sun from naked eye. This will culminate on 21st June when the star comes within 34.65M miles of the earth. Be sure to watch the sky on June 21 at 12:30 pm. (S'pore: 3pm) It will look like the earth has 2 suns.!!

The next time Aderoid may come this close is in 2287.


This should be a sight to behold.
Posted by HappySurfer at 3:39 PM