Well, whaddayaknow, Formula One (F1) season is here again! Kicked off in Australia last week, this week, the circuit hits Malaysia, Kuala Lumpur to be exact. The flagoff at Sepang International Circuit (SIC) is due in about four-and-a-half hours just as I am writing this. 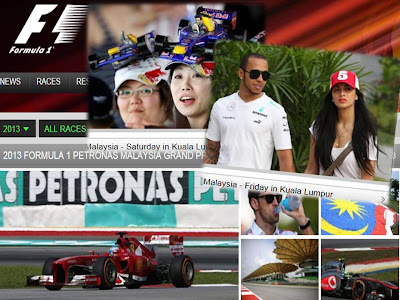 Sebastian Vettel stormed to pole position at the qualifiers yesterday at showery Sepang. Malaysian weather is quite unpredictable, with sunshine one hour, storm the next. F1 had to be halted a few years ago due to extremely bad weather. To be exact, the year was 2009 because of torrential rain, the race was declared over after 31 laps.

F1 attracts tourists wherever it is held. If you are planning to visit Malaysia during the F1 weekend, make your hotel booking early, like months ahead, or suffer the consequences of having to pay something like three times the normal hotel rate or worse, find yourself without accommodation.

If you are collecting merchandise, head on over to the Sepang International Circuit where booths are set up with exclusive merchandise for sale.

For fans, a number of exhibitions are being set up around KL in various malls and shopping complexes.

From The Star..
Meanwhile, Petronas Dagangan Bhd (PDB) is organising the Petronas Xtrack at the SIC open car park from 9am to 3pm today and tomorrow.

The exhilarating Xtrack, which is free for the public, houses activities such as All Terrain Vehicle rides, rally, drift and go-karting. There will be prizes up for grabs too.

Closer to the city centre, there are several F1 related activities and promotions taking place.

The roadshow held on the ground floor of the Centre Court will end tomorrow.

Over at Pavilion Kuala Lumpur, the public can feast their eyes on the latest Spring Summer Collection at the Pitstop fashion runway showcase featuring brands such as Oroton, Bread & Butter, Bebe and Shinju Pearls.

Remember to also check out the Caterham One Team exhibition which is being held until tomorrow at the mall’s Bukit Bintang entrance with race cars and various merchandise on display.

For concert-lovers, American hard rock band Guns N Roses will take to the stage at the SIC helipad area once the 56 laps are over. This is for this evening. The concert is free and open to all grandstand ticket-holders and hillstand ticket-holders who upgrade their tickets.

For those in KL, you can catch a series of live performances at the Twin Towers@Live 2013 concert. The concert will be held at the entrance of the Petronas Philharmonic Hall at 5pm. Yesterday was Day 1 of the concert. Backstreet Boys performed last night so not sure if they'll be performing again tonight.

The concert is free for all in the general public zones. 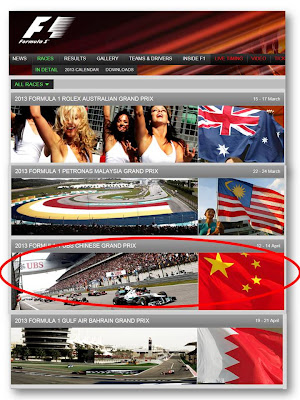 Btw, here's a look at the results so far, courtesy of Google.. 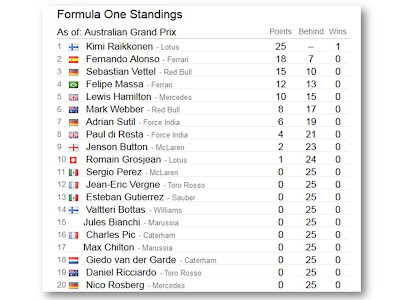 All images (except the last one) are from: formula1.com