Tom Hanks of The Terminal came to mind when I first read on Saturday about a 22-year-old Palestinian passport-holder and another case of a Palestinian family of six (teacher, Kaled Ali, his wife, Rwalda Shahada, and their four children) being stranded at the Kuala Lumpur International Airport (KLIA) for more than 50 days. 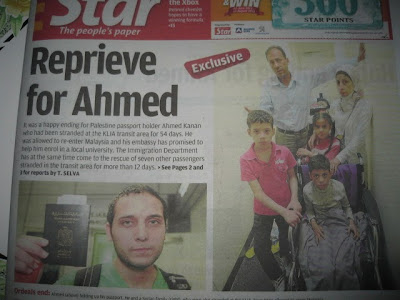 Today, The Star frontpages news of KLIA being a base for refugee racket.

KUALA LUMPUR: People fleeing from countries torn by strife are being duped by international syndicates which have been using the Kuala Lumpur International Airport as their base.

Palestinian ambassador to Malay­sia Abdelaziz Abughoush said these syndicates abused the kindness shown by the Government in allowing Muslims to enter the country without visas.

“There are Mafia-type groups taking advantage of desperate people, not just Palestinians, by promising them travel documents and visas to enable them to enter any country of their choice.

“We are constantly warning our citizens about these crooks and urging them not to fall prey to them,” he told The Star. More..Syndicates prey on refugees


The article also tells how the stranded family of six landed in Malaysia.  Their case is being looked into by the authorities.

Meanwhile, it's a happy ending for Ahmed Kanan, the 22-year-old Palestine passport-holder.  He has been allowed into Malaysia on a 30-day special pass while the Immigration Department studies his case.   His embassy has offered to help him enrol into a local university.