What's in a name? Lots - with some cultures maintaining the family name or surname. If you were born into a traditional Chinese family, there is a certain sequence to naming an offspring based on the family lineage. In a normal three-character name, the centre character of the name is determined as charted. It's quite a complicating process but one that is recorded somewhere filed away for reference for when the need arises. But this tradition is slowly fading away with the new generation. 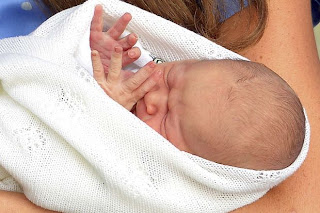 Britain's new prince born on Monday, July 22, has been named. The naming is relatively quick by British royalty standards as Charles and his first wife Diana took a week to announce William's name in 1982, while the world had to wait a month after Charles was born in 1948.

The new royal baby is named George Alexander Louis, sticking firmly to royal tradition with a first name used by six previous kings. He is third in line to the throne and will now officially be known as His Royal Highness Prince George of Cambridge, after his father and mother the Duke and Duchess of Cambridge.

The baby will not automatically be King George VII when he comes to the throne, however, as there have been reports that William's father Prince Charles may take that title when he succeeds the queen.

A little understanding of how the name was chosen:

Louis is one of William's middle names and was also the first name of Lord Louis Mountbatten, the Viceroy of India and a mentor to Prince Charles. Mountbatten was killed in 1979 when the Irish Republican Army blew up his boat off the coast of Ireland.

Alexander meanwhile puzzled the pundits, apart from the fact that the queen's middle name is Alexandra.

But George, which was the 12th most popular name for baby boys in England and Wales in 2011 and derives from the ancient Greek word for farmer, was widely predicted.

"George is obviously a tribute to the Queen's father and will, I imagine, give her majesty great pleasure," historian and royal biographer Robert Lacey said.

British bookmakers said they had taken a loss on the name but the size of the betting market on the royal baby compensated for it.

Congratulations have poured in from around the world, while Chinese fortune tellers predicted the baby will grow up to be determined but introverted - and a hit with the ladies. The new prince was born on Monday, Jul 22 at 4:24pm. The lunar calendar date is the 15th day of the 6th lunar month - a fullmoon day.

By the way, have you seen the Oscar-winning film "The King's Speech"? It is the story of George VI, Queen Elizabeth II's father, whose birth name was actually Albert and was known as Bertie. The film portrayed George VI's struggle to overcome a severe stutter and lead his nation during World War II. Colin Firth, one of my favourite actors, was cast as George VI.

Posted by HappySurfer at 6:23 PM