After days of protesting in Egypt, the people's uprising has done it.

Fireworks light the sky as opponents of Mohamed Morsy celebrate in Tahrir Square in Cairo on Wednesday, July 3. Tahrir Square is now the epicenter of two Egyptian upheavals. 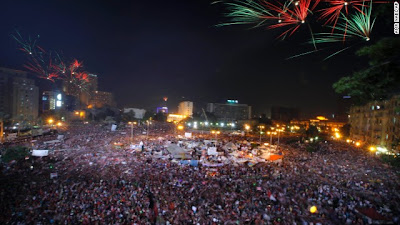 Gen. Abdel-Fatah El-Sisi said the military was fulfilling its "historic responsibility" to protect the country by ousting Mohamed Morsy, the Western-educated Islamist leader elected a year ago. The country's constitution has been suspended, new parliamentary elections will be held and Adly Mansour, the head of the country's Supreme Constitutional Court, will replace Morsy, El-Sisi said.

But across the Nile River, Morsy supporters in another plaza denounced his ouster as he urged them to remain peaceful.

More on CNN..Morsy out in Egypt coup
Posted by HappySurfer at 2:38 PM

Email ThisBlogThis!Share to TwitterShare to FacebookShare to Pinterest
Labels: Egypt