Frequent flyers of AirAsia would be happy to note that the new international arrival hall at the Low-Cost Carrier Terminal (LCCT) at Sepang in Selangor will open for operation on Dec 15, weeks ahead of its original scheduled completion date of March 15 next year. 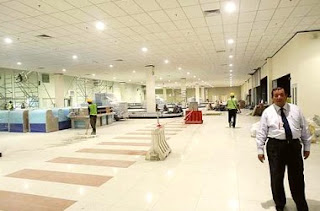 The extension would add 32,000sq m of additional floor space to the existing 28,000sq m available and will have six baggage carousels which would speed up luggage-claim.

Check-in counters will be increased from 72 to 117 and will now be able to handle 2200 passengers an hour, an increase from 600 passengers currently.

There would be more retail and food and beverage outlets plus shower and surau facilities. The waiting area will be bigger with 600 seats.

The expansion is timely as even on non-peak days, it can be crowded as shown in the picture below. 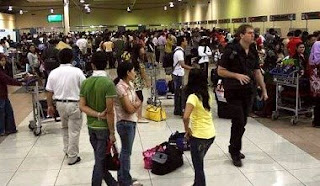 The LCCT besides serving AirAsia domestic flights and the AirAsia X international services to Thailand, Indonesia and Australia, it also caters to the Cebu Pacific Airways of the Philippines and the Tiger Airways of Singapore. Come March next year, AirAsia X will start operating the London Stansted-Kuala Lumpur route from the LCCT.

With air fares increasingly becoming cheaper and competitive, air travel will no doubt see a healthy increase in passenger load.

Source: The Star
Posted by HappySurfer at 2:38 PM