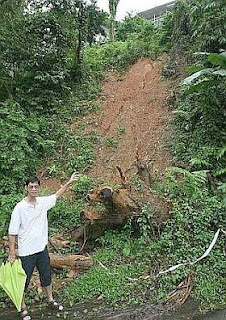 This is another site where residents are living in fear of a landslide. This is at Taman Zooview, a 30-year-old housing estate on the hillslopes next to the National Zoo in Hulu Kelang, Kuala Lumpur. The eroded patch in question is Jalan Lee Woon (and I know two families living there).

This time, somebody messed with nature: ".. the owner of the house above the hillslope had cleared the patch of its natural vegetation apparently to have a better view of the city below." As if things aren't bad enough, the owner has gone overseas and the house is now vacant.