Comic-Con takes place this weekend. If I were in the U.S. specifically in the San Diego area, I would be there any one or even all days of the 4-day exhibition.

San Diego Comic-Con International, commonly known as Comic-Con or the San Diego Comic-Con or "SDCC", is a multigenre convention held annually in San Diego, California, United States. It is a four-day event (Thursday-Sunday) held during the summer. On Wednesday evening, there is a preview for professionals, exhibitors, and some guests pre-registered for all four days.

Originally showcasing comic books, science fiction/fantasy and film/television, and related popular arts, the convention now includes a larger range of pop culture elements, such as horror, animation, anime, manga, toys, collectible card games, video games, webcomics, and fantasy novels. According to Forbes, the convention is the "largest convention of its kind in the world"; it is also the largest convention held in San Diego. In 2010, it filled the San Diego Convention Center to capacity with over 130,000 attendees. (Wikipedia)

This year, for the first time, Hello Kitty is making an appearance on Comic-Con, storming it as TIME magazine puts it. 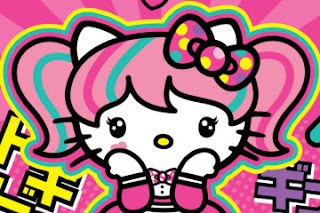 Hello Kitty may have reached the Final Frontier, but she’s never been to Comic-Con before. That all changes this weekend, when Sanrio brings its beloved Kitty and her friends to San Diego for the annual comic convention, which runs from July 18 through the 21st.

Sanrio will make its official debut with “Hello Kitty Fashion Music Wonderland,” an interactive experience loosely based on Alice in Wonderland, but starring Hello Kitty. The weekend’s Hello Kitty event will feature a pop-up shop, offer Sanrio nail art, and, of course, will feature a visit by Kitty-chan herself. It is open to the public at Comic-Con’s Interactive Zone at Petco Park.

Email ThisBlogThis!Share to TwitterShare to FacebookShare to Pinterest
Labels: Exhibitions