Putting together jigsaw puzzles.  Not really my inclination but every time I go to a bookshop, I'd make it a point to drop by at the jigsaw puzzles corner. The attraction lies on the boxes with pictures such as the one below.  I like the colours and the 'matchstick' figures engaging in different activities reflecting vibrancy.  Animals such as dogs sometimes make an appearance.  Nice.

The piece below is by L S Lowry (Laurence Stephen Lowry), an English artist born in Stretford, Lancashire. Many of his drawings and paintings depict Pendlebury, where he lived and worked for over 40 years, and Salford and its surrounding areas.  (Wikipedia has an interesting article on Lowry.)

This Lowry painting depicts a town scene with the Mount Zion chapel in the Lancashire market town which can be seen on the right in this 1954 painting A Street in Clitheroe. 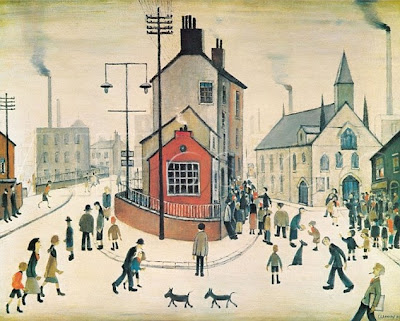 Fastforward to the actual in current times..  The chapel is still a part of the township landscape. 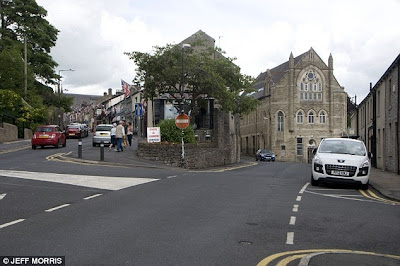 A closeup of the chapel.. 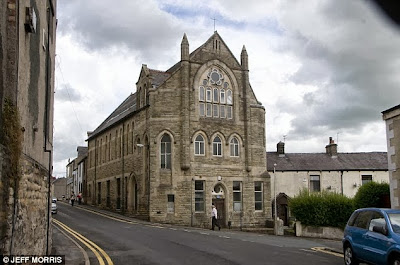 An article in the Daily Mail caught my attention the other day. The article says the disused chapel in Clitheroe is being converted into the town's first mosque. Though the plan to use the Mount Zion Methodist Church as a Muslim place of worship initially sparked fierce opposition, the work is now drawing support from all sides.

Seven years on, the first phase of conversion is complete, and the community is now trying to raise £250,000 to install heating and lighting, internal decoration, doors and windows. You can read about it on the Daily Mail.

This article brought me back to late last month when a mosque in Tanjung Sutera Resort, a private resort in Johore, a state in the south neighbour to Singapore, had to be demolished after the resort owner allowed a group of Singaporean Buddhist tourists to conduct meditation sessions. There was much debate all around and in the end the authorities decided that the mosque had to go. The Singaporean resort owner who is a Muslim had his Malaysian PR status revoked. But I digress.

Back to L S Lowry and his art..

During his life Lowry made about 1,000 paintings and over 8,000 drawings. In later years, Lowry spent holidays at the Seaburn Hotel in Sunderland, County Durham, painting scenes of the beach and nearby ports and coal mines. When he had no sketchbook, Lowry drew scenes in pencil or charcoal on the back of envelopes, serviettes and cloakroom tickets and presented them to young people sitting with their families. Such serendipitous pieces are now worth thousands of pounds; a serviette sketch can be seen at the Sunderland Marriott Hotel (formerly the Seaburn Hotel).

Lowry's work is held in many public and private collections. The largest collection is held by Salford City Council and displayed at The Lowry. Its collection has about 400 works.

214 of Laurence Stephen Lowry paintings can be viewed on bbc.com if you are interested.

Among them is this one of Piccadilly Gardens.

In case you are interested to view Lowry's art, on 26 June 2013 a retrospective of Lowry's art opened at the Tate Britain in London, his first there, scheduled to run until 20 October.