In the sports of football (soccer), Brazil has produced many great talents. Google today honours one of Brazil's greats with a Google doodle. 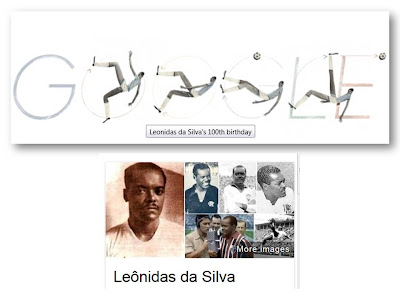 Leônidas da Silva was an association footballer and commentator. He is regarded to be one of the most important players of the first half of the 20th century. He played for Brazil in two World Cups, and was the top scorer of the 1938 World Cup.

He was known to have perfected the "Bicycle Kick" and used it in a number of games. Most famous of all, he used it on 13 November 1948, in the massive 8–0 victory over Juventus. The play (and the goal) was captured in an image (below) and is regarded to be the most famous picture of the player. In the 1938 World Cup, he also used the bicycle kick, which delighted the watching spectators. When he did it, the referee was so shocked by the volley that he was unsure whether it was within the rules or not. - Wikipedia

Posted by HappySurfer at 1:38 PM