If you are someone who likes to watch the sky and gaze at the stars and the moon, you might be interested to know that the moon this weekend will be the biggest full moon of the year. It is what is known as a "perigee Moon".

What's a perigee moon? Science-Nasa explains it well: The Moon's orbit around Earth is not a circle; it is an ellipse, with one side 50,000 km closer to Earth than the other. Astronomers call the point of closest approach "perigee," and that is where the Moon will be this weekend, in fact, tonight, Jan 10.

Perigee full moons come along once or twice a year. 2008 ended with one in Dec (biggest full moon in 2008) and now 2009 is beginning with another. So, grab your camera and snap the biggest moon of the year tonight wherever you may be.

The picture below from Science.NASA, was taken in Dec 2008 by photographer Eric Ingmundson of Sparta, Wisconsin. The perigee moon was over a neighbour's farm. Look how big the moon was. Perigee moons can be 14% wider and 30% brighter than lesser Moons we see other times of the year. 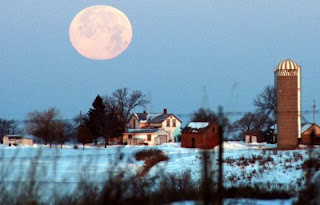 Here is a picture from Spaceweather.com, taken last night on the Kolyskia peninsula in Russia, a blast of moonlight pierced the clouds and produced a 22deg ice halo. Ice halos are formed when tiny ice crystals in the atmosphere refract and reflect light. 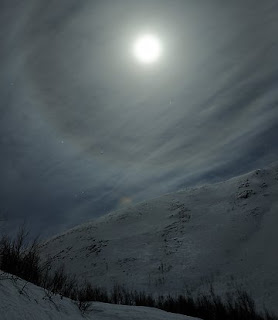