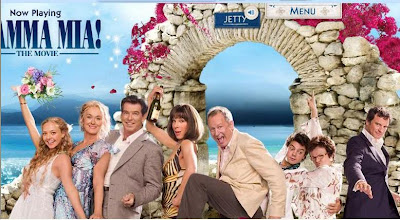 Mamma Mia! the movie is doing its rounds in cinemas/cineplexes in Kuala Lumpur right now. If you are here and would like an hour plus of some song and dance, or if you are a fan of ABBA's, you have got to see this movie. It's a great musical with a wonderful cast - Pierce Brosnan (the ex-Mr James Bond, Meryl Streep (The Devil Wears Prada), Colin Firth (the boyfriend in Bridget Jones's Diary), Amanda Seyfried, etc. - and they sing too.

Mamma Mia! is the feature-film adaptation of the beloved musical that has been seen by more than 30 million people in 170 cities and eight languages around the world.

The feature film adaptation of the global stage hit production brings the magic of ABBA’s music to the silver screen. With rising star Amanda Seyfried and Dominic Cooper, alongside Hollywood heavy-hitters Meryl Streep, Pierce Brosnan, Colin Firth Stellan Skasgârd, Julie Walters and Christine Baranski, the film features the stars’ versions of 17 ABBA classics in this celebration of a mother, a daughter and three possible dads.

Go watch the movie. I won't spoil it for you.... but then I can't resist showing you snippets of it. How to resist a good thing? How?

For some delightful moments in the meantime, visit the site of Mamma Mia! the movie.

Hear some of the best songs from the movie


See the ABBA Reunion at the Mamma Mia! movie premiere in Stockholm


And the World Premiere in London