SPAM or luncheon meat as it is popularly known here is a popular food item among non-Muslims, especially the Chinese. It is prepared in a number of ways - in stews, steamed, commonly deep-fried in a batter of eggs and garlic, diced up for fried rice, in sandwiches, etc.

For a long time, it was just the Ma Ling brand that was on the shelves but these days, a lot of other brands have entered the market. The SPAM sold here normally comes from China.

I received a well-meaning email yesterday about the Ma Ling brand. Thought I'd pass it on here for your info.

SINGAPORE- The agent of a popular mainland canned pork product has initiated a recall and suspended sales after tests showed a sample contained a cancer-causing antibiotic.

The Centre for Food Safety yesterday revealed this after laboratory tests showed a sample of Shanghai Ma Ling B2 340g pork luncheon meat (less sodium) was found to have traces of nitrofurans.

The batch number is B2 5 for the product, which carries a best-before date of December 26, 2009 . According to the sole agent, the canned pork was imported on only two occasions - last December and January this year. The scare spread when Singapore 's Agri -Food and Veterinary Authority detected carcinogenic traces in a consignment of canned pork from Ma Ling and Gulong food processing factories.


Wikipedia has some interesting trivia, quoted verbatim below. 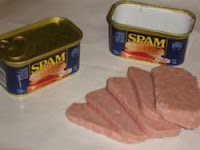 Spam luncheon meat is a canned precooked meat product made by the Hormel Foods Corporation. The labeled ingredients in the Classic variety of Spam are: chopped pork shoulder meat with ham meat added, salt, water, sugar, and sodium nitrite to help "keep its color". The product has become part of many jokes and urban legends about mystery meat, which has made it part of pop culture and folklore.

Name origin
Introduced on July 5, 1937, the name "Spam" was chosen in the 1930s when the product, whose original name was far less memorable (Hormel Spiced Ham), began to lose market share. The name was chosen from multiple entries in a naming contest. A Hormel official once stated that the original meaning of the name Spam was "Shoulder of Pork And haM".[citation needed] According to writer Marguerite Patten in Spam – The Cookbook, the name was suggested by Kenneth Daigneau, an actor and the brother of a Hormel vice president, who was given a $100 prize for coming up with the name.[4] At one time, the official explanation may have been that the name was a syllabic abbreviation of "SPiced hAM", but on their official website, Hormel states that "Spam is just that. Spam."

According to Hormel's trademark guidelines, Spam should be spelled with all capital letters and treated as an adjective, as in the phrase "SPAM luncheon meat". As with many other trademarks, such as Xerox or Kleenex, people often refer to similar meat products as "spam". Regardless, in practice, "spam" is generally spelled and used as a proper noun.

Nutritional data to pay attention to..
A 56 gram (approximately 2 ounce) serving of original Spam provides 7 grams of protein, 2 grams of carbohydrates, 15 grams of fat (23% US Daily Value) including 6 grams of saturated fat (28% US Daily Value), and over 170 calories. A serving also contains nearly a third of the recommended daily intake of sodium (salt). Spam provides very little in terms of vitamins and minerals (0% vitamin A, 1% vitamin C, 1% calcium, 3% iron). It has been listed as a food that is a poor choice for weight loss and optimum health and as a food that "is high in saturated fat and sodium". [6]

As of 2003, Spam is sold in 41 countries worldwide. The largest consumers of Spam are the United States, the United Kingdom and South Korea.

In the United States, the residents of the state of Hawaii and the territories of Guam and the Commonwealth of the Northern Mariana Islands (CNMI) consume the most Spam per capita. On average, each person on Guam consumes 16 tins of Spam each year and the numbers at least equal this in the CNMI. Guam, Hawaii, and Saipan, the CNMI's principal island, have the only McDonald's restaurants that feature Spam on the menu. Burger King, in Hawaii, began serving Spam in 2007 on its menu to compete with the local McDonald's chains.[8][9]

In Hawaii, Spam is so popular it is sometimes dubbed "The Hawaiian Steak." [10] It is traditionally reheated (cooked), resulting in a different taste than Spam eaten by many Americans on the mainland, who may eat Spam cold.[11] One popular Spam dish in Hawaii is Spam musubi, in which cooked Spam is combined with rice and nori seaweed and classified as onigiri.[12]

In the United Kingdom Spam was a popular addition to the menu of fish and chip shops[citation needed], where slices are battered and deep-fried and are known as 'spam fritters', However this tradition has faded out in recent decades.

Spam is popular on camping or fishing trips and is sold quite regularly in Australia. It is popular with breakfast, particularly with eggs or barbecued and served with barbecue sauce. Due to the fairly large Asian and European community, Spam is often prepared in an Asian or European way, e.g. with eggs and rice or deep fried in batter and served with chips or in a burger; however, sometimes it is simply sliced and put into sandwiches or salads.

In Okinawa, Japan, Spam has become very popular for much the same reason as in Hawaii. Spam is even used in the traditional Okinawan dish chanpurū, and there is also a Spam burger sold by local fast food chain Jef.

In China, Spam is also a rather popular food item, being served as a sort of Western cuisine. It is often used in sandwiches.

In Hong Kong, Spam is commonly served with instant noodles and fried eggs, and is a popular item in cha chaan teng.

In the Philippines, Spam is a popular meal, especially when eaten with eggs and fried rice, often for breakfast.

In South Korea, Spam (Hangul: 스팸; RR: seupaem) is popular in households as an accompaniment to rice. A television ad claimed that it is the most tasty when consumed with white rice and gim (laver seaweed used for some type of handrolls). It is also an original ingredient in budae jjigae (lit. "army base stew"), a spicy stew with different types of preserved meat. In fact, Spam is so popular that according to "Why Does Popcorn Pop?" by Don Voorhees, Spam is used more often as gifts than chocolate.

Source: Wikipedia
Posted by HappySurfer at 10:38 AM