When I first read about Wikileaks and about those cables with private and sensitive information, I wondered about the source or sources. I may now have the answer. A few days ago, the suspected Wikileads source appeared in US court standing trial at a general court martial on 22 criminal charges. 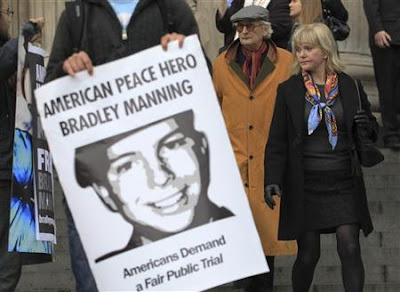 If convicted of all counts, Bradley Manning would face a maximum punishment of life imprisonment, reduction in rank to the lowest enlisted pay grade, forfeiture of all pay and allowances and a dishonourable discharge, the Army said in a statement.

The most serious charge, aiding the enemy, is a capital crime that carries the death penalty but the Army has indicated it does not plan to seek that punishment.

WikiLeaks eventually posted online hundreds of thousands of sensitive diplomatic cables that exposed the candid views of U.S. officials and their allies.

It also released about half a million classified U.S. files on the Iraq and Afghan wars.

Manning was caught after he bragged about his activities to former hacker Adrian Lamo, who turned him in to authorities, Lamo told Reuters.

Bradley Manning - would you consider him a Hero or a Villain?


More: The Star..Suspected WikiLeaks source appears in U.S. court
Posted by HappySurfer at 9:38 AM