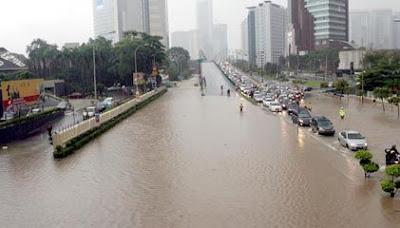 This is Jalan Tun Razak being flooded yesterday.
If not for the caption in the article, I wouldn't have been able to tell where this place is. Flooding changes a whole landscape.

Heavy rain yesterday just for a couple of hours caused Sungei (River) Bunus to overflow and thigh-high floodwaters cut off traffic along Jalan Tun Razak causing massive traffic jams during the evening peak hours. This stretch is in front of the national library which is also where the National Heart Institute (IJN) is located on the opposite side.

Floodwaters reached chest level according to a nursery school teacher. Some 23 children were all ushered to the second floor and were later rescued by boat by rescue team from the Fire department. 20 students of a multimedia college located next to the nursery were also evacuated.

Many vehicle drivers abandoned their vehicles and waded out.

However, all roads were accessible after the flood waters subsided at 7pm.


Source: The Star.. Over 20 nursery children rescued in KL flash floods
Posted by HappySurfer at 10:08 PM