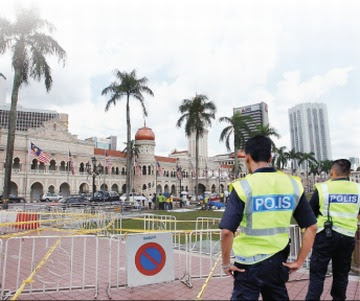 Dataran Merdeka has been cordoned off and all roads leading to it would be closed from 6am today to 6am on Sunday.

KL mayor Tan Sri Ahmad Fuad Ismail said no gathering would be allowed at the square without his written consent. This is voiced in relation to the Bersih 3.0 rally scheduled for Saturday, Apr 28, which Dataran Merdeka as the venue is not being approved. Alternative venues offered include Cheras Stadium, Titiwangsa Stadium, Bukit Jalil Stadium and Stadium Merdeka.


Source: The Star..Mayor: Stay out of Dataran Merdeka