Pep Guardiola to end reign as Barcelona coach in summer 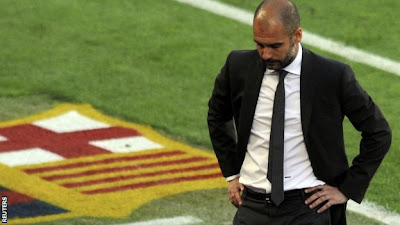 Pep Guardiola will stand down as Barcelona manager at the end of the season after deciding not to renew his rolling one-year contract.

The 41-year-old, who was appointed in 2008 and has led the Catalan club to 13 trophies, will be succeeded by current assistant Tito Vilanova.

Barca look set to miss out to Real Madrid in La Liga and were knocked out of the Champions League by Chelsea.

"The reason is simple: four years is enough," said Guardiola.
More on bbc.co.uk..Pep Guardiola to end reign as Barcelona coach in summer
Posted by HappySurfer at 8:13 AM