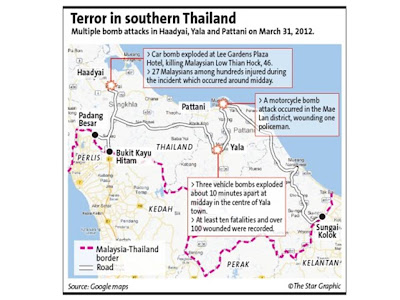 Two days ago when I read about the bombing incidents in Yala in southern Thailand, I was thinking luckily it wasn't in Haadyai. Still, it was a terrible thing to be happening when such terrorist acts result in injuries and loss of lives. Eight people died and at least 70 were injured in a series of bomb explosions on Saturday. Three bombs went off in the business area of the city of Yala around lunchtime. It was reported that the devices may have been placed in a car and a motorcycle.

Haadyai or sometimes spelt Hatyai is a tourist destination popular with Malaysians. Busloads of Malaysians descend upon the tourist town of Hatyai, especially during weekends. People go there for a short holiday to have a chance to visit a foreign land, for a spot of shopping and some cheap and authentic Thai food. The more adventurous would have a chance at their agenda however.

Haadyai is merely 30km away from the Malaysian border and only a two-hour drive from Penang. From Kuala Lumpur, buses leave around ten at night and reach there in the morning. A weekend trip would entail leaving Kuala Lumpur on Friday night, arriving at Haadyai Saturday morning. A trip to the seaside town of Songkla is sometimes included. Some sightseeing, shopping and a Thai seafood dinner will complete the short sojourn to Thailand. After Sunday morning after breakfast will see everyone getting back into the coach heading back to Kuala Lumpur arriving around nine at night. 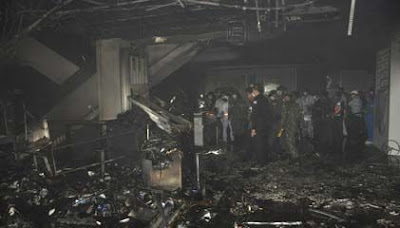 Unfortunately, Haadyai was not spared in the spate of bombings in the southern Thailand recently.

On March 31, 2012, a car bomb shook the 33-storey, 405-room Lee Gardens Plaza Hotel, (the hotel popular with Malaysian and Singaporean visitors), killing four people injuring a hundred others, some critically. A Malaysian from Kuala Kedah is now listed as missing in the bomb blasts. Haadyai Mayor Prai Pattano clarified that two car bombs in the basement car park were used in the attack and not one as reported earlier.

Lee Gardens Plaza Hotel is along the busy Phachaitipat Road. There is also a McDonald's restaurant on the hotel's ground floor that is popular with tourists. The hotel is also within walking distance to the often busy Suntisuk Market.

A press release handed out by a Thai official stated that 416 people (at least 27 Malaysians) were injured in the blast at the hotel, of whom 37 were admitted to hospitals; three people died in the blast - a Malaysian man and two Thai women. There is an unidentified body of a man lying unclaimed at the Songkhlanagarind Hospital. The Muslim insurgents have been blamed for the deadly coordinated attacks.

Menanwhile, Malaysians are taking no chances, with many postponing or cancelling their planned holiday trips to Haadyai following the blasts at the Lee Gardens Plaza Hotel.

Foreign Minister Datuk Seri Anifah Aman advised Malaysians against travelling to southern Thailand and that those who intend to visit the area should only do so if it concerns urgent matters and they should inform the Malaysian consulate in Songkhla.

Thailand will be celebrating Songkran (Thai New Year also known as the Water Festival) on April 13.


Source: The Star
Posted by HappySurfer at 3:38 PM