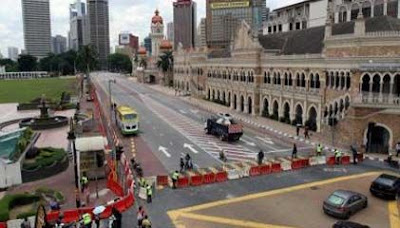 This is Dataran Merdeka, quiet and deserted after KL Mayor, Tan Sri Ahmad Fuad Ismail, declated Dataran Merdeka and all roads leading to it would be closed from 6am Friday to 6am on Sunday.

Meanwhile the Magistrates court has issued an order preventing the organisers of Bersih 3.0 and members of the public from entering Dataran Merdeka on Saturday. The order was made at 8:30pm Thursday by Magistrate Zaki Asyraf Zubir following an application by the police.

The court order bars organisers and members of the public from gathering at Dataran from midnight Friday until May 1.

From what I read, the venue for Bersih 3.0 is Dataran Merdeka. There will also be a Bersih rally in Ipoh, at the Sultan Abdul Aziz Recreational Park, popularly known as the Polo Ground. The Bersih movement is for free and fair elections in the country.

Flashback to last rally, last year..
Dataran Merdeka before the last rally, Bersih 2.0 on Jul 9 2011
Situation in parts of Kuala Lumpur then
Yellow, a tricky color to wear

Posted by HappySurfer at 4:56 PM