There is a lot happening in the United Kingdom at this moment, particularly in London - what with the London 2012 Olympics coming on in July and with the Torch Relay in progress, another celebration is underway, the Queen's Diamond Jubilee. 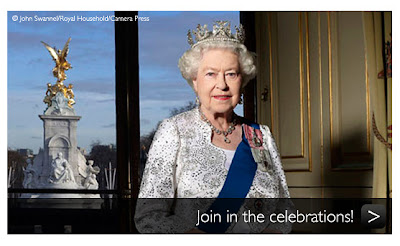 Yes, HM Queen Elizabeth II celebrates 60 years reign this year and the nation is celebrating it on a grand scale. BBC reported that The Queen is marking her Diamond Jubilee this year and celebrations reach a peak in early June with a four-day weekend of events, between Saturday 2 and Tuesday 5 June. A girlfriend who now lives in London said she will be going to the Thames Diamond Jubilee Pageant which will be one of the highlights of the weekend celebrations.

The weekend's events schedule is as follows according to the BBC. You can download a PDF version of this guide (2.74MB), to print out and keep.

Sunday 3 June - River Thames Pageant, Big Jubilee Lunch
The Thames Diamond Jubilee Pageant will be one of the highlights of the weekend celebrations. At high water (about 14:00BST) more than 1,000 boats traditional and modern will escort the Queen and the Duke of Edinburgh aboard a specially decorated royal barge down the River Thames.

16:15 Queen disembarks at Royal Naval Reserve Base to watch flotilla pass by

A look at the river map of the Diamond Jubilee pageant:

Monday 4 June - Jubilee Picnic, BBC Concert, Jubilee Beacons
A special concert organised by the BBC and singer Gary Barlow will be held at Buckingham Palace. It will be attended by the Queen, the Duke of Edinburgh and other members of the Royal Family in the surroundings of the Queen Victoria Memorial in front of Buckingham Palace. Guests, who were granted tickets by ballot, will also be invited to attend a Jubilee picnic in the Buckingham Palace Gardens. The concert will begin at 19:30BST.

It will be star-studded concert, set against the spectacular backdrop of Buckingham Palace, celebrating Her Majesty the Queen's 60 year reign. 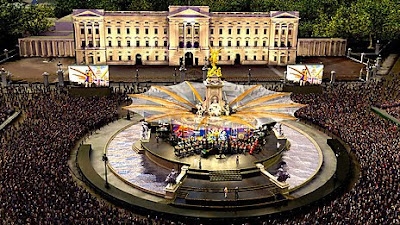 Tuesday 5 June - Service, carriage procession, balcony appearance
The final day of the Diamond Jubilee weekend will be marked by a national service of thanksgiving at St Paul's Cathedral attended by the Queen and the Duke of Edinburgh. There will be a special prayer for the Diamond Jubilee. This will be followed by two receptions, a lunch at Westminster Hall and a carriage procession to Buckingham Palace, with a balcony appearance and a fly-past.

11:30 The Queen and The Duke of Edinburgh are driven to Mansion House reception

Route of the royal carriage procession

Weekend Jubilee festivals
- Hyde Park Jubilee Family Festival - 2 June, 3 June
This two-day family festival organised by Sainsbury's is hosted by Myleene Klass and Jon Culshaw. It features live music and entertainment on the main stage and in zones such as the Kids Zone, the Disney Zone, the Parade Ground - featuring the White Helmet Motorcycle Display Team - and The Commonwealth, with Harambee African drummers and Maori Haka dancers.

- Battersea Park Festival - Sunday 3 June
Some 90,000 ticket holders can see the pageant from the river bank or big screens in Battersea Park which is hosting a special festival. Curated by Hemingway Design, of Vintage Festival fame, and artist Clare Patey, the event celebrates all things British.

For more information and to know where to watch/listen, check out bbc.com

Map of Avenue of Sail
http://www.thamesdiamondjubileepageant.org/AvenueOfSail.aspx

Time Out best places to watch the pageant
http://www.timeout.com/london/feature/2590/where-to-watch-the-queens-jubilee

Related article:
Diamond Jubilee: The changing face of the Queen over the past 60 years
Pop royalty plays to queen in UK jubilee concert
Parade and palace wave finale for queen's jubilee