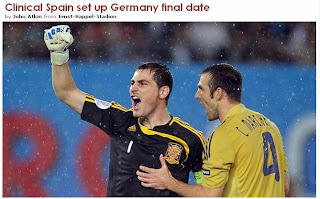 So, it all boils down to Spain meeting Germany in the finals for the UEFA Euro 2008 Championship. I can imagine the mamak stalls being packed this coming Sunday.

For foreign readers, mamak stalls are our local version of roadside cafes, al-fresco eateries. Ever since cable television came on the scene in Malaysia, these mamak stalls have tvs fitted to draw in the crowds. People who frequent these eateries are mostly sports fans who enjoy watching live games with lots of other like-minded people, er...maybe. Other times, mamak stalls are great places to meet up with friends for a chat, for some gossip or simply to hang out in addition to savouring the local fare.

The term "mamak" is actually a locally-coined term which refers to Indian Muslim migrants from India. When they emigrated from India, they brought along their cuisine and from there, the mamak phenomenon was born.

Mamak stalls are popular in the big cities of Kuala Lumpur, Penang and Johor Bahru and most of them are open 24 hours a day, every day of the year. If you have read or heard that one can find food at any time of the day or night in Malaysia, these must be the places that are being referred to. This feature of food being available any time serves well for college students as they keep irregular hours and these young growing people are hungry at whatever time their tummy growls.

Food at mamak stalls are cheaper (compared to food at other food outlets) and the fare they serve is popular because they can be consumed by everyone, of any religious faith, being pork-free. The staple food at the mamak stall has to be the roti canai - pronounced 'roti chanai'.

Roti canai is a flour pancake quite like the base of a pizza, served with a variety of curry - chicken, fish or beans. There are other variations to this pancake. You can add an egg or egg and onions or even sardines. This simple delicious pancake is nicely washed down with the mamak stall's trademark beverage, the teh tarik or literally translated as "pulled tea". This beverage is actually tea with condensed milk, poured from the mug to the glass, back and forth a few times, to produce a frothy tea drink. Yum!! Tea keeps me up the whole night so if I need to stay up, this would be my keep-me-up!

Here is a video of how a roti canai is made:


Of course, the food variety is not limited to just the roti canai and the teh tarik though these are the most popular choices. Other food served include fried and soup noodles, local soups (ox-tail, chicken, beef stew), rice and dishes that go along such as fried chicken, fried fish and fried fish roe, fried calamari, curry dishes, fried vegetables, pickled vegetables, bean crackers, and many others.

As I was saying, this Sunday should see a huge crowd at mamak stalls. Of late, mamak stalls have evolved from al-fresco to indoor modern mamak stalls just like the one in the (Wikipedia) picture below. 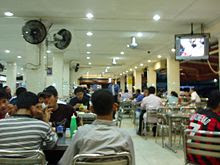