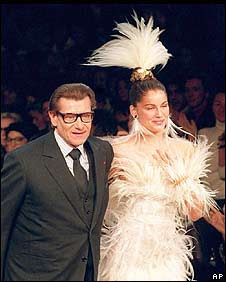 Designer wear. Do you own any, have a full closet of them or simply detest it, believing haute couture is simply overrated.

No matter how we feel about it, fashion plays a huge role in our lives, inherent, actually. Everything we have on our back is basically fashion. Yes, the basic street fashion is fashion.

Clothes, like flowers, (colourful) are captivating which makes people-watching for the clothes they wear, an interesting pastime and fashion designers adulated. Mere mortals they may be but their creations live on. Take for instance, Versace, Gianni Versace that is, he may have died more than a decade ago, on July 15, 1997,to be exact (killed by Andrew Cunanan), but his clothes live on making him immortal in a sense.

Sadly, as we speak, the world of haute couture has lost yet another icon, Yves Saint Laurent, who died on Sunday evening in Paris, after a long illness. He was 71.

Yves Saint Laurent, considered by many as the greatest fashion designer of the 20th Century, changed the face of the fashion industry when he became chief designer of the House of Dior at 21.

He designed clothes that reflected women's changing role in society, making them more confident personally, sexually and in the work-place. He changed forever what women wear, introducing trouser suits, safari jackets and sweaters.

In the words of the editor of British Vogue, Alexandra Shulman, she said Saint Laurent had helped democratise fashion:

"Before that people had small salons for rich people.

"Saint Laurent brought it to the people.

"He was young and groovy. Pop stars were hanging out with him and younger generations related to him."


If you are a fashion designer or someone in the business of clothes or simply have something to say about clothes, here's something you might want to participate in. Send in your tribute, on the form on the BBC.com site. This is what you need to do:

Did you know the designs of Yves Saint Laurent? Are you a designer who was inspired by him or did you work with him? Have you ever worn one of his creations? What contribution do you think he made to the fashion industry? Send us your tributes using the form below.


Source: bbc.com
Posted by HappySurfer at 10:22 AM