Last night, I was puzzled being caught in a bad traffic jam at a usually rather smooth-flowing stretch. Vehicles were all queuing up for gas before the gas hike at midnight. All the months of speculation about the increase is finally over. Below was a typical scene at most, if not all, petrol stations. Some stations had to display the "Sold Out" sign long before midnight while others had oil tankers refilling the station tanks at the same time vehicles were refuelling their gas tank. 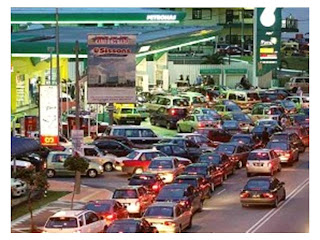 The Government announced yesterday an increase in petrol and diesel prices, stating that it can no longer continue to subsidise fuel. Petrol price is up by 78 sen while diesel is up by RM1.00. And prices will be reviewed monthly based on the global oil price.

I saw on TV, elsewhere - in India - oil price was also increased at midnight yesterday.

Drastic times need drastic measures. Time to get a bicycle!