Oprah Winfrey - Are you a Fan? 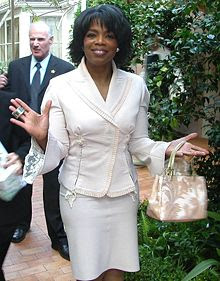 Oprah Gail Winfrey (born January 29, 1954), often referred to simply as Oprah, is an American television host, media mogul, and philanthropist. Her internationally-syndicated talk show, The Oprah Winfrey Show, has earned her multiple Emmy Awards and is the highest-rated talk show in the history of television.

She is also an influential book critic, an Academy Award-nominated actress, and a magazine publisher. She has been ranked the richest African American of the 20th century, the most philanthropic African American of all time, and the world's only black billionaire for three straight years. She is also, according to some assessments, the most influential woman in the world.

I know that audiences to her shows were given great gifts, one time, even a car each.

Back to where we started.... So, do you watch her show and do you consider yourself a fan of Oprah?
Posted by HappySurfer at 2:23 PM